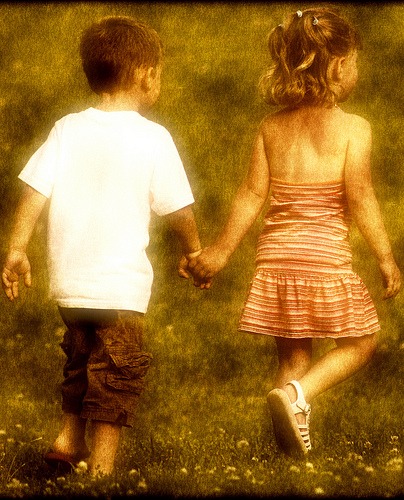 A few days ago I was watching a show on the computer to make my task of cleaning and sorting through some drawers a little less boring.

The youngest was napping and the older two were playing together in one of the bedrooms. I was feeling pretty happy with the set up.

In between deciding whether or not to keep the half used crayons, I heard laughing and chattering between the two oldest kids.

“That’s nice,” I thought as I continued to dig through the mess I'd created.

It dawned on me that this was not a sound that will always be available for my ears.

I paused the show and stop my work.

Sitting back in the chair I listened.

Soaking in the giggles and smiling to myself, I wondered, “How did I get here? Me, who swore as a teenager that I would never have children, now with three of them!?”

A number of older women have told me that this time, when the kids are young and home, is one of the best times of life. Yes, it’s hard, but it’s good.

There is so much to be done and seemingly so little time to do it! This causes me to fly by the moments and forget to cherish and enjoy them.

“It’s so nice they are getting along.” I thought. “So nice, they are enjoying each other’s company.”

I thought about telling them later, but then remembered how quickly things can turn bad. This moment might only last a minute. My daughter could be yelling for me to help get her brother out of the bedroom in no time at all . . .

I decided to go in and tell them how happy I was that they were playing so nicely together before it was to late!

As I entered the room they smiled and told me that brother was making up a story which was very entertaining (that’s what all the giggling was about).

I kissed each on top of the head and said how nice it was to hear them having such a good time and treating each other so well. Sister piped up with, “I’m even letting him sit on my bed!”

They were both proud.

I was proud too.

Seizing the moment is not always natural or easy, but I’m determined to do it more often.

Yes, this was a delightful. The highlight of my week (I won’t tell you about the next day!).

Note to self: Listen and hear. Pay attention. The sounds will change and one day be gone. Soak it up while you can!

I'm thankful for these sounds!

I'm linking up with Bigger Picture Moments and Thought-Provoking Thursday and Thankful Thursday.

Becoming a Better Mother: Be Nice to Yourself
Next Post: Delightful Links for the Weekend (and Tell Your Time Winner) →