Peace in the Kitchen: Use A Timer!

Ah, the kitchen timer.  So simple, yet so effective!

Be warned: this post is going to reveal my highly distractible nature 🙂

A few days ago I woke up to the faint smell of bread in the air.  I lay there for a minute trying to figure out where this aroma was coming from.  Then it hit me…“My sourdough!” I had worked on it the day before and had two loaves sitting under a dishtowel to rise.  I had planned to bake them in the evening, but got busy with other things, then eventually tired out and went to bed.

Sadly, my loaves rose and fell over night and looked a little sad (and deflated) by morning: 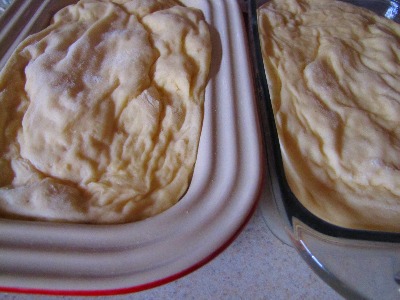 I baked them anyway and they tasted fine; just not very pretty and a little crunchy on top.

If I had set the timer to go off when they should have been finished rising, I could have avoided this little mishap. It wasn't the worst thing, at least the bread was still edible.  Unlike the almonds I burned a few weeks ago while trying to roast them.  I actually thought to set the timer, but figured I wouldn't forget.  I was wrong!

I could feel cranky with myself for being so absentminded, or I could accept the way I am and do something to prevent future incidents.  I'm choosing the later.

If you have children, you know you don't often have the luxury of even completing a thought, let alone remembering how long the almonds have been in the oven and what time they should come out.  So give your brain a break and set the timer!

I'm actually considering clipping the timer to myself, because I may take the trash outside, see a bunch of weeds to pull (that should just take a second), call the kids to look at a bug I found while pulling said weeds, then smell the wafting smoke coming from the kitchen! It could happen.

If you are a little more with-it than me, you can still reap the benefits of using a timer in the kitchen.  Life is unpredictable, especially with kids.  Eventually you will be interrupted.

A simple timer only costs $8

. or so and could save you a lot more than that.  Ask me, I know.  Those almonds I burned were organic!

Do you use a timer in the kitchen?

This post is linked to Kitchen Tip Tuesdays at Tammy's Recipes.

Category: IN THE KITCHENTag: Peace in the kitchen